Southern Ski's mission is to provide the best custom bootfitting service available in the Carolina's and the South East.

Finding the  “SWEET SPOT” over your ski center

The skier’s leg shape or the boot set up or a combination of all of these can cause the problem.

In this article we will deal with the often over looked effects caused by larger calf muscles.

Most current model boots have a 14 degree forward lean (Entry level designs often have greater forward lean angle) with no way to move the cuff rearward, consigning skiers with more than 14” in circumference calf muscles to ski the rear of the ski, out of balance.  If you combine a larger calf with a longer Tibia the problem can become even more severe.

Fore/Aft balance will be affected by each increase in calf circumference at the top of the boots cuff.  Circumference, divided by Pi (3.14) indicates that for each increase of one inch in circumference, the Tibia and by extension the Knee position will be pushed forward by about a third of an inch.

As the knee is pushed forward the skier will be forced to sit back a little in order to bring his center of mass over the center of the ski.  This will cause overuse of the quadriceps muscles and premature overall fatigue.  This ”torso to far behind the knee” (sitting back) position will cause G-loads to sink the skier’s body downward in each turn.  In most cases this will cause the tail of the uphill ski to hookup on it’s uphill edge at the end of each turn, the skier will have to step his uphill ski at the end of each turn, this gets hairy as the terrain gets steeper.

An easy test to check a skier’s position is to have the them push down and forward on the tongue of the boot then slowly move the knee to a more upright position until the heel starts to bear a little more weight, at that position the calf muscle should not be pushing on the back of the cuff. (You should be able to load the heel somewhat without pushing the back of the boot).  As calf circumference increases, it is necessary to bend the upper shell of the boot cuff rearward to allow the skier to attain the correct position.

I recently located this blog response made by Bob Barnes on the Barking Bear Forum, in it he comments about the things that will affect fore/aft balance

I have copied it here because he expresses his thoughts so clearly and they agree with the emphasis of our article.  He is absolutely right about the many variables involved in fore/aft balance.  We have made “leg and calf shape”, “bold” because it is the anatomical variable we are working with, brought into the equation by the skier and not a part of his gear.

“Forward lean--which is influenced by boot cuff alignment, boot design and fit, footbed design, internal ramp angle and heel lifts, external ramp angle (boot sole angle), delta angle (the effect of bindings), leg and calf shape, and ankle range of motion--affects ankle and foot function, fore-aft balance, range of flexion-extension, and the ability to tip and steer skis. While there is some room for personal preference, optimizing fore-aft boot setup is absolutely critical if you want to perform your best.

And there is no substitute here for a top-tier bootfitter who can decipher all the variables I mentioned above and come up with the best individual solution specifically for you. Unfortunately, very few skiers will probably want to invest the time and money required for a truly customized setup with a skilled bootfitter. But without it, your skiing will at best be marked by compensation for sub-optimal setup, which willl handicap your movements and limit your performance.

That said, you can exert forward leverage on your skis (if you need to--another discussion!) with even a poor fore-aft setup. It's not whether you can do it--it's how awkwardly and inefficiently you have to move to compensate for your setup. Perhaps the biggest effect is your ability to balance fore-aft through only a limited range of flexion-extension (short-tall). I've posted this diagram before, but here's a simplified look at this effect: 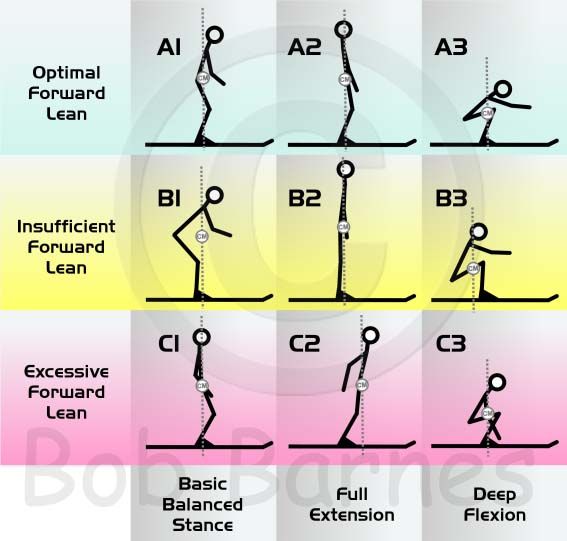 The first column shows a skier with A1) optimal setup, B1) boots too upright, and C1) too much forward lean. All three skiers are balanced over the middle of their feet (note the dotted line through their center of mass), but skiers B1 and C1 must adopt less-than-functional stances to compensate for their boot setup. The second and third columns show how skier B cannot flex deeply without falling over backward (B3), while skier C cannot extend fully without falling foward (C2). Only skier A can flex and extend through his full range without losing balance.

Of course, none of this matters much if your boots don't fit snugly, or if they are very soft. But stiff, snug, high-performance boots are worse than useless if they are not set up properly.

But again, this illustration shows only one aspect of fore-aft alignment. Boots must also adapt and compensate for optimal foot and ankle function. Many skiers lack sufficient range of ankle flexion ("dorsiflexion") to even fit into a boot with a lot of forward lean, and attempting to do so can cause excessive pronation (collapsing arch), which affects edging movements and knee function, not to mention pain and foot problems.

I'm not trying to scare anyone away from this topic. But I'd love to convince everyone to find a good bootfitter. Your skiing will thank you!"

Atomic - For when you're ready to explode on the scene.

Nordica - Above and beyond the call of duty!

Nordica - Above and beyond the call of duty!

Atomic - For when you're ready to explode on the scene.